Shift 1: From “Realism Blind Spot” to “Potentiality Spring Board”

This is one of the stories from our new series entitled “Your Next Wise Move: from MAD-LAND to NO-MAD Land”. Our legends are all italic. You can read the the first article here to get the Big Picture.

In this article, we suggest one Shift in thinking which is essential to move from Mad Land to NO-Mad Land. 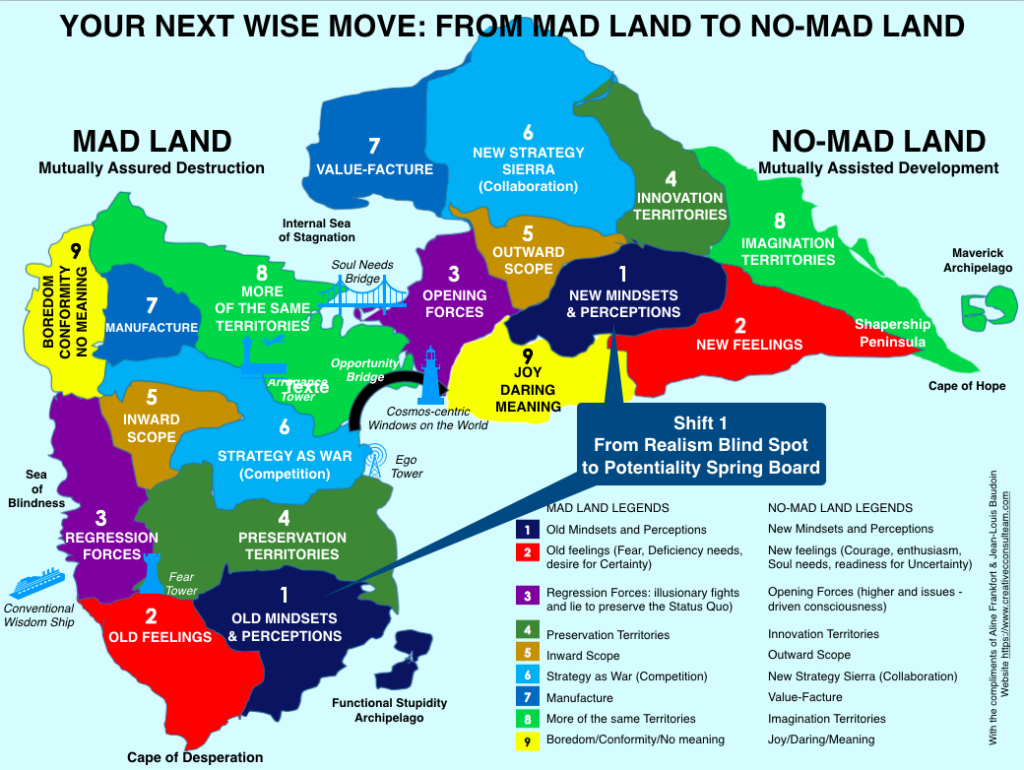 Most of the time, it is a matter of “perception” and beliefs.

We tell ourselves a “story”.

We all know the saying: “They did not know it was impossible, so they did it!”

By breaking the rules, those people made the “impossible possible”!

They shifted the assumptions others had about limitations. They changed the story people told themselves and changed their lives. They inspired others.

A few years ago, a French researcher pointed out the monumental mistakes in decision-making. One of his examples was September 11th 2001. It has been proven that, long before, the German Intelligence Services had warned the FBI and the CIA in detailed ways about the preparation of the attacks. The political people in charge had all the information that could have prevented the catastrophy. Therefore, the question is: why didn’t they do anything about it?

And the answer is: by lack of Imagination!

The American Politicians in charge did not believe the information they received. More precisely, given their “Vision” of the world, they were incapable of imagining that terrorists would dare to attack the greatest power in the world!

So, as you can see, deciding is also imagining.  It is being capable of envisaging the “non-impossible”, of reaching the capacity to overcome the incertitudes that we create. And this is crucial because every day, decisions are made by Leaders, managers and ourselves….decisions which create the Future and depend on our more or less open Vision of the world.

From Realism Blind Spot to Potentiality Spring Board

This is why we invite you to take this first wise move from MAD to NO-Mad Land: from “Realism Blind Spot” to “Potentiality Spring Board”

Realism always pretends to be wise and lucid. But it is often simply blind. And not always wise.

As a saying goes: “Wisdom comes with age. But sometimes age comes alone.”

So, whatever your age is, when you see yourself or others pretending to “know” what is realistic, remember that “reality” is a story we tell ourselves.

Whether you are a Leader, a mother or a father, a brother, if you want to build a No-Mad world, it is now key to get out of the prison of the “Realism Blind Spot” and to inspire others to free themselves.

You can consciously look at the world through vanguard lenses.

You can jump on “Potentiality Spring Board” and have an enlarged Perception or Vision of “Reality”. It will change what you believe is “possible”.

It is time to reverse the traditional way of looking at things, attributed to Saint Thomas:

“I only believe what I see”. We know that “the eye only sees what the brain is ready to understand” (Bergson)

Concretely, here are two “Do’s” and “Don’ts” to support your shift:

What’s your next Fosbury Flop?

Whether you believe you can do a thing or not, you are right.
— Henry Ford

For more metaphors and stories from our new series “Your Next wise move: from MAD-LAND to NO-MAD Land”, please follow the link to the first article here.

To help disseminate these blogs, we also have a Linkedin page

For those interested by more about decisions, this point is developed in my TEDX conference.