This is one of the stories from our new series entitled “Your Next Wise Move: from MAD-LAND to NO-MAD Land”.
All our legends are in italic.

Most of us – and among us many Leaders – , “KNOW” that the world is unpredictable…but we don’t ACT in coherence: at a deeper level, we still behave AS IF the world were stable and predictable.

The world we have created is so complex and changes so fast that it goes beyond our capacity to understand it. There are many more “UNKNOWNs” than KNOWNs” in this world.
We have to give up the illusion of predictability and control…and start to LOVE Uncertainty.

But that’s not what most people do: as professionals, they are struggling, falling without admitting it into confusion, fear, anxiety, lack of imagination and a desire for Certainty: in short, what we call Regression forces which lead them to preserve the old instead of shaping the new. (see our blog https://www.creativeconsulteam.com/from-mad-land-to-no-mad-land/).

To get out of the mess we’re in, we need to create the opposite of fear: hope and desire. We need a new meaning-making story that explains the Present and creates a strong desire for a possible viable Future.
This requires a leap of Imagination, new mental models and courage.
Indeed, when we have no story that explains the Present and describes the Future, hope evaporates.

To us, the next wise move is

Why is it crucial? Because it enables us to make better and more conscious decisions in uncertain times

The quality of a decision depends on the breadth of the context that is taken into consideration.
If you are a decision-maker, you probably are under an enormous pressure – intellectual and emotional – to make key strategic decisions that will drive the company’s success in such a competitive landscape, liable to change quickly and often in UNANTICIPATED ways…
You know you cannot predict the Future from extrapolating the Present.
You know you will have to face Uncertainty.
And you know that the challenges you face require that you shift your Thinking.

That might be all bad news. Except if you find ways to make it really exciting!

In many companies – with a few exceptions – the strategic plan that emerges is mostly based on a set of “forecasts” and ends up as a Roadmap.

The teams KNOW that, in a moving environment, there are many possible Futures BUT, in their strategic practice, their “DESIRE for Certainty” is so strong that they keep old fashioned assumptions, approaches, tools and methods to reduce Uncertainty at least in three ways:

In other words, they do NOT behave according to what they know. Instead of raising good QUESTIONS and EXPLORING what “COULD happen”, they come up with mostly predictable and repetitive ANSWERS, sometimes to the wrong questions, make “PLANS” and decide what they WANT to see happen based on false assumptions of what WILL happen.

Are we still dominated by the “sacred” myth of Efficiency which pushes people to be or at least to appear in control even in the face of Uncertainty?

How can you make the move from the “Desire for Certainty Abbey” to the “Confidence in Uncertainty Bay”?

Let’s use a metaphor to illustrate the possible shifts to make: consider two men – Mr. MAD and Mr NO-MAD – whose “assumptions” are significantly different and lead them to travel in the various territories of our Map in very different ways. Follow the numbers and look here under at the contrasts. 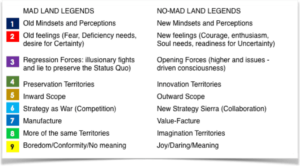 1
Mr. MAD is locked in the “Desire for Certainty Abbey” surrounded by the “Confusion Shadows and Fog”. His fear of Uncertainty prevents him and his team to explore the unknown and keeps them prisoner of places such as

Mr. NO-MAD has cultivated the capacities needed to reach the “Confidence with Uncertainty Bay” with its “Inspiration Horizon” , a vision of a viable Future which gives hope and inspiration to everybody and is a completely new “meaning making story”

2
Mr. MAD is trapped in old emotions. He and his team spend a lot of energy hiding their confusion and pretending things are under control, at “Carnival Masks Museum “: where you find people who look like Lifeless wax dolls after spending their Life masking who they really were

Mr. NO MAD encourages everyone to openly express their questions and to visit the “Authenticity Cultural Center”: a place where we make room for ourselves and for others to be genuinely authentic

3
Mr. MAD is trapped in the “Regression Forces” which usually lead to the S.O.S. (same old solutions). He is in the “Fear to Lose Theater”: the place where we see the Future as a threat to lose what we have

Mr. NO MAD and his team have unlocked the Opening forces, at the “Life Affirming Purpose Amphitheater”: where teams put emphasis on making their business a leverage for meaningful Value creation which supports the fabric of Life

4
Of course, Mr. MAD is focused on self-preservation, focused on Value capture and Profit, afraid of reaching “Income Dead End”: because focusing only on income does not lead anywhere

Whereas the whole NO-MAD team explores Innovation territories: one of their preferred place is “Outcome Horizon”: where deep motivation is generated by the Vision of creating positive Outcomes

5
For long, Mr. MAD and his team have developed an Inward scope, focused on “Ego-Centric Canyon”: where Vision is narrowed by the little “Me, I and Myself”, far from the global imperatives business should tackle
The NO MAD team aspires to and “feels” the emergence of a more “lateral” world, more fluid, more distributed, more collaborative and conscious of the ECO system. They have a “Mondo-Centric Panorama”: where our Vision encompasses the widest possible range of interests

6
Deep down, Mr. MAD knows that the world is no longer as a chess game anymore – with traditional and clearly defined problems, finite boundaries, fixed constraints, predetermined known movements, one winner, one loser. He also knows incremental approaches will not be enough in this game-changing world.
He knows all that. But that’s easier said than done.
Why? Because that is a rational statement of what should be done.
But at the end, decisions are made for emotional reasons. And we all know “Logic will never change emotions or perceptions”.

Even IF his mental maps are regenerated and now accurately represent the world as it is emerging, he is not ready emotionally. He does not find in himself the courage to decide what SHOULD be decided and what the world calls for.

So, Mr. MAD continues to consider “Strategy as war” and keeps Competiing against his “enemies”!
His team and himself develop abstract battle plans based on linear extrapolations of data!
Instead of being radical, imaginative and purposeful, he finds himself tempted to preserve the status quo and the Comfort Zone. He reorganizes the furniture in the same room, he restructures and practices Reengineering without truly changing anything.
He even falls into the illusion that short-term corrective measures or logical adjustments will be enough!

On the contrary, Mr. NO-MAD sees the world as a interweaving of forces and interconnected and complex problems. He knows that the game board, the players and the rules are different.
He knows that he must learn to “tango” with Reality and to navigate the Ocean of Incertitude! And with pleasure if possible!
With teams and other industries, he dares “Strategy as Collaboration” and strive to create a network of partners who are going to generate more than the sum of the parts. They put Audacity and Imagination at work in order to reinvent the whole system!

As a conclusion, Fear is the worse guide for decision-making.
The “Desire for Certainty Abbey” will lead you to “plans”.
We urge you to cultivate the Imagination, the Courage, the Freedom and the Sense of Purpose needed to move to the “Pleasure of Uncertainty Bay”. It will help you operate the needed “Shifts in Minds for Shifts in Action”.
It will help you navigate our uncertain world in which there are many possible “futures”.
It will also help you create the Future you desire.

For more metaphors and stories from our new series “Your Next wise move: from MAD-LAND to NO-MAD Land”, please follow the link to the first article here and the second one  Shift 1: from “Realism blind spot” to “potentiality Spring Board”

Follow us on Twitter or receive the blogs directly in your inbox by subscribing here.
To help disseminate these blogs, we also have a Linkedin page

Absolutely fabulous! Should be largely disseminated by the Club of Rome.